The Plitvice Lakes National Park lies at the south end of the slopes of Mala Kapela chain at the height between 369 and 1279 a.s.l. This is an area of alpine topography that exerts a considerable impact on climatic phenomena and consequently, on the vegetation of the area. According to Koeppen’s classification, the climate type prevailing here is Cfb. (moderately warm and humid, with hot summers), the climate where beech thrives. Average annual rainfall is 1550 mm. Apart from being defined by latitude, hight above sea level, ground inclination and sun exposure, the prevailing vegetation is also defined by geologic bedrocks, soil and the farming methods used. Limestone and dolomitic rocks of various ages (Triassic, Jurassic, Cretaceous) make up the geological bedrock. Considering the relief, climate and land farming in the recent past, vast forest surfaces in their various stages – from thicket to virgin forest (Čorkova uvala virgin forest) – have remained very well preserved (3/4 of the Park’s surface area). Forests covering the National Park used to be managed in the past based on the so-called Rules of Forest Management (the first Rules for Ljeskovac Forest Management date back to 1883), until the time the today’s Nature Protection Act was passed, according to which the forests are left to develop naturally (not in terms of forestry farming, but based on a Forest Action Plan).

So far, several forest communities have been described within the Park boundaries: 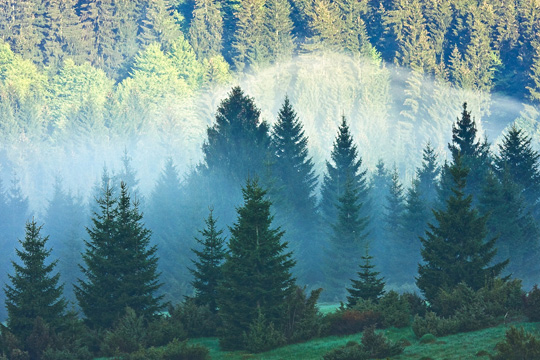 Apart from representing habitats for such an abundance forest flora, they are also home to various wildlife species. A great, stable population of owls and woodpeckers is especially worth noting, as a sign of forest ecosystem quality. Large mammals who find their habitat here are brown bear, wolf and lynx (important species from NATURA 2000), roe deer, red deer…

Forests play a vital role in the protection of soil from erosion, affect climate and hydrology and participate in the production of oxygen and storage of carbon (greenhouse gases). Being very well preserved, nearly pristine, these ecosystems are crucial in nature and wildlife diversity preservation.