Creator of waterfalls and lakes

The process of tufa formation, which in turn forms tufa barriers and creates the lakes, is part of the outstanding universal value for which Plitvice Lakes National Park was inscribed on the UNESCO World Heritage List. 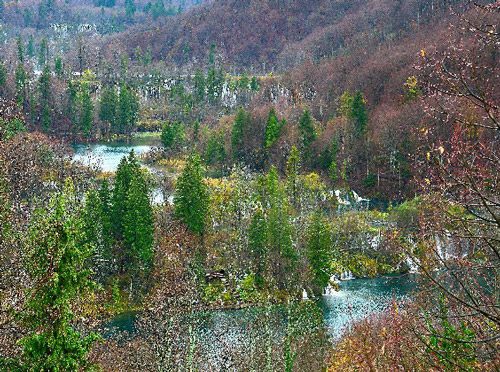 Part of the cascade system of the Upper lakes (photo: PLNP archive)

The most prominent surface waters in Plitvice Lakes National Park are the cascading lakes of varying size, formed through the biodynamic process of growing tufa barriers that intersected this former river valley and enabled the creation of lakes. The surface waters take up less than 1% of the territory of the national park, with a total volume of 22.95 million cubic metres of water. As the tufa barriers grow, the water levels rise, increasing the volume of water in the lakes. The 16 larger named lakes, and many other smaller unnamed lakes are separated by these tufa barriers, but are connected in this unique water system via a series of waterfalls between the lakes. 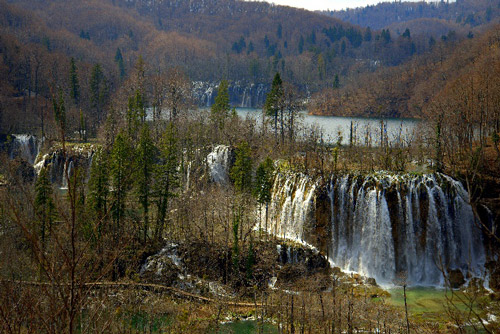 Part of the cascade system of the Upper lakes (photo: PLNP archive)

Even today, the tufa barriers are actively growing, and this biodynamic structure is constantly changing the appearance of the lakes and the waterfalls.

How tufa is formed

There are numerous definitions for tufa, and one of the general ones that is commonly used to describe the tufa at Plitvice Lakes is: Tufa is a hollow, porous rock created from the deposition of dissolved calcium carbonate in the water by plants, algae and mosses. The second, which provides a more precise definition of the conditions of tufa formation is: Tufa is a product of calcium carbonate deposited at temperature conditions near to the ambient temperature, and often contains the remnants of microphytes and macrophytes, invertebrates and bacteria.

The water of the Plitvice Lakes is oversaturated with dissolved calcium carbonate in the form of calcium bicarbonate. At the riffles and particularly at the tufa barriers, calcium carbonate (calcite) is extracted from this mineralised water in the form of tiny crystals that are then deposited. The basic chemical formula for the deposition of tufa is:

The three main chemical requirements that must be met are:

What is not visible, and is very important to this specific and complex process of forming tufa are the blue-green algae (Cyanobacteria), the diatomaceous algae (Diatomeae), various bacteria, protozoans (single cell organisms) and multicellular microscopic organisms. These organisms are the living community that has formed on the rock, the plants (mosses) and objected submerged in the water. 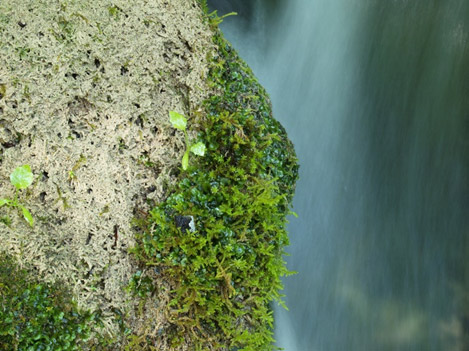 The calcite microcrystals adhere to the matter secreted by the algae and bacteria. These attached crystals become the site of crystallisation, where calcium carbonate from the water will continue to be deposited, forming the famous tufa barriers.

Tufa form is primarily given by the aquatic mosses and other microphytes and macrophytes, insect larvae and other invertebrates on the barriers. However, moss is most common, covering the steep and sometimes vertical tufa barriers, and the species that most often participates in building tufa is Palustriella commutata. This species is quickly “petrified”, and the appearance of the moss remains intact in the tufa. In calmer areas, the moss species Ptychostomum pseudotriquetrum builds tufa of the “Brijum” type. This results in the formation of tufa on the lower sections of the moss, while it continues to grow, enabling a continuous process of tufa building and barrier growth. 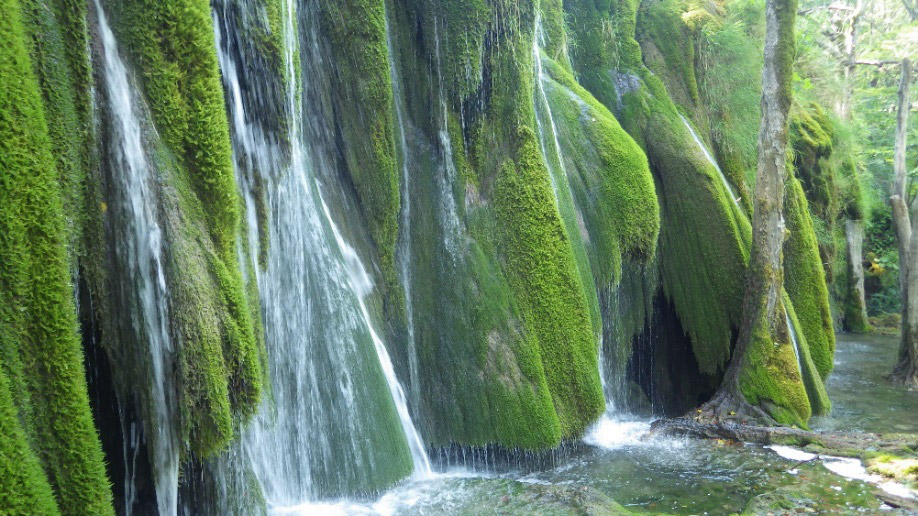 Age and growth of the tufa barriers

The process of tufa formation dates way back into the geological past, but only during periods with a warm and wet climate, similar to the climate today. The age of the active tufa barriers has been estimated at between 6,000 and 7,000 years, which corresponds to the theory that they began to grow following the end of the last Ice Age. Along the sides of the present day watercourses, palaeobarriers have been discovered at higher elevations, particularly at the most upstream parts of the lakes. Dating analyses have shown that they range in age from 250,000 to 300,000 years (Mindel-Riss interglacial period) and 90,000 – 130,000 years (Riss – Wurm interglacial period).

Analysis of the ages of the active barriers and lake sediments have shown that the annual rate of deposition of lake sediment is about 17 times less than the rate of growth of the tufa barriers (about 13.5 mm), which results in a growth in lake water levels. Recent analyses applying hydrological methods have calculated that the exit barrier of Kozjak Lake is growing at an annual rate of about 5.6 mm, while the barrier at Prošćansko jezero Lake is growing three times faster. Each barrier has its own growth dynamics, some grow faster, other slower. In some cases the downstream barrier grows faster than the upstream barrier, submerging the upstream barrier, and making two previously separated lakes into one.

An example of these dynamics if the sunken barrier in Kozjak Lake. About 400 years ago, Kozjak Lake was divided into two lakes, separated by a tufa barrier and a waterfall about 40 metres high. However, the tufa barrier at the outflow of Kozjak Lake (at Kozjački mostovi) grew much faster than the barrier that separated these two lakes. This resulted in a raising of the water level in the lake, gradually covering the waterfall, and causing the barrier to become submerged. This brought the two lakes into the one we see today. 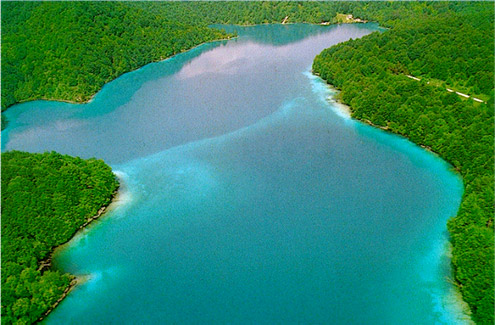 The growth and development of the tufa barriers is threatened by changes to the physicochemical and biological factors that play a role in the tufa building process. Due to its fragile structure, tufa is vulnerable to mechanical damage and large dynamic loads. These tufa barriers are often threatened due to changes in the water regime, which can result in the barriers drying out, which will stop their growth. Barriers can also break due to trees falling on them, or due to melting ice in the spring period. 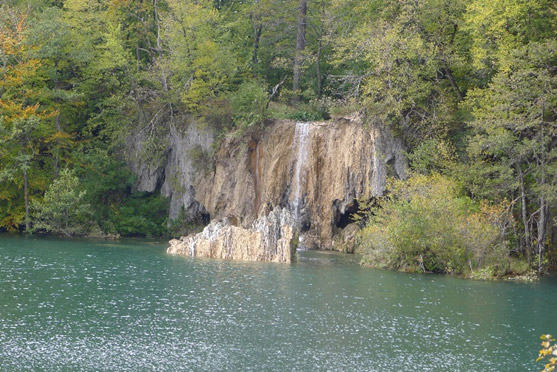 A broken off piece of the travertine barrier Ciginovac/Okrugljak (photo: PLNP archive)