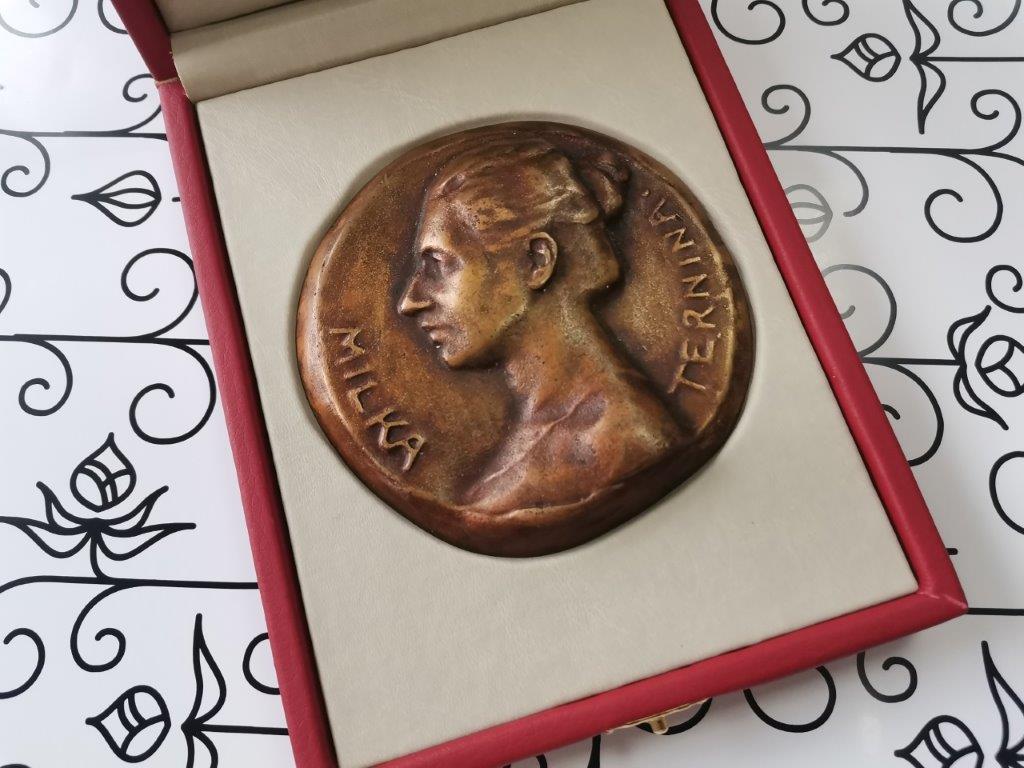 you are located now at Lower Lakes in front of the memorial tablet to Milka Katarina Trnina, the greatest Croatian opera artist and one of the world’s greatest opera divas who lived at the turn of the 20th century.

She was born in Vezišće (Municipality of Križ) in 1863, a small town 50 km away from Zagreb. Her famous musical journey began with her first performance at the age of 16 at the Croatian National Theater in Zagreb. She studied music at the Vienna Conservatory, as the best in the class of the Viennese singing pedagogue Joseph Gänsbacher and the best graduate with the golden medal. Her personal caracteristics were great natural talent, exceptional diligence, high intelligence and a broad general knowledge.

She has sung at opera houses in Vienna, Leipzig, Graz, Bremen, the Royal Court Theater in Munich, Boston, Albany, Philadelphia, Baltimore, the Metropolitan Opera in New York, Queen’s Hall in London, Bayreuth, Cincinnati, Chicago and of course, Zagreb. At the age of 27, the Bavarian prince Regent Luitpold named her the royal Bavarian chamber singer. She has sung in operas made by famous composers such as Wagner, Verdi, Mozart, Beethoven, Puccini, Meyerbeer, Bizet and Gounod.

For each of her performances in Zagreb, in her native Croatia, a great celebration was made to honour her. Her name was chanted, songs were written to her and diplomas and wreaths handed. She was the very top of the opera world, one of the most famous and respected artists of her time, a living legend, the best performer of the tragic heroines of Wagner’s operas and a first-class artist. In 1900, she was at the peak of her career and praised as one of the first sopranos in the world, which is why the world still remembers her as the Croatian Nightingale.

Her career lasted a full 24 years, she played 65 roles in about 1,200 appearances. After a singing career, she was a singing pedagogue at the New York Academy of Music for 3 years, after which she returned to Zagreb and lived there for the rest of her life.

There are no recorded traces of her art because in her propensity for perfectionism she asked for all the records of her voice to be destroyed.

Her connection to Plitvice Lakes is a result of her humanitarian work. During a concert held at the Croatian National Theater in Zagreb in 1898, she donated all her income to the Society for the Beautification and Landscaping of Plitvice Lakes and their Surroundings. The same year Society named one of the most beautiful waterfalls at Lower Lakes after her. At the moment, you are just  few steps away from Milka Trnina Waterfalls located between Milanovac and Gavanovac Lakes. These are the only waterfalls at Plitvice Lakes named in honor of the famous person, during her lifetime.

Nowadays, the award of the Croatian Society of Music Artists for interpretive achievements in the field of classical music, several schools, streets in a dozen Croatian cities and numerous cultural and singing societies were named after Milka Trnina.

One legend says that Swiss chocolate maker Carl Russ-Suchard was a huge fan of Milka Trnina. He followed the diva all over the world, just to listen to her voice. Allegedly, it was his fascination by Milka Trnina that led him to name his Milka chocolate after her.

In 2021., due the occasion of the 80th anniversary of the death of famous opera diva Milka Trnina, we decided to present at least a bit of her opus to our guests.  From 15. to 23. May 21. in the Jezero Hotel you will be able to hear quiet classical music from the operas in which Trnina sang. Inspired by Trnina, our pastry chefs designed two chocolate desserts, Cappello and Choco-symphony, which you can taste at the Jezero Hotel, the Poljana restaurant and the Slap buffet at the Entrance 1 to the Park.

We wish you a pleasant stay at Plitvice Lakes National Park!