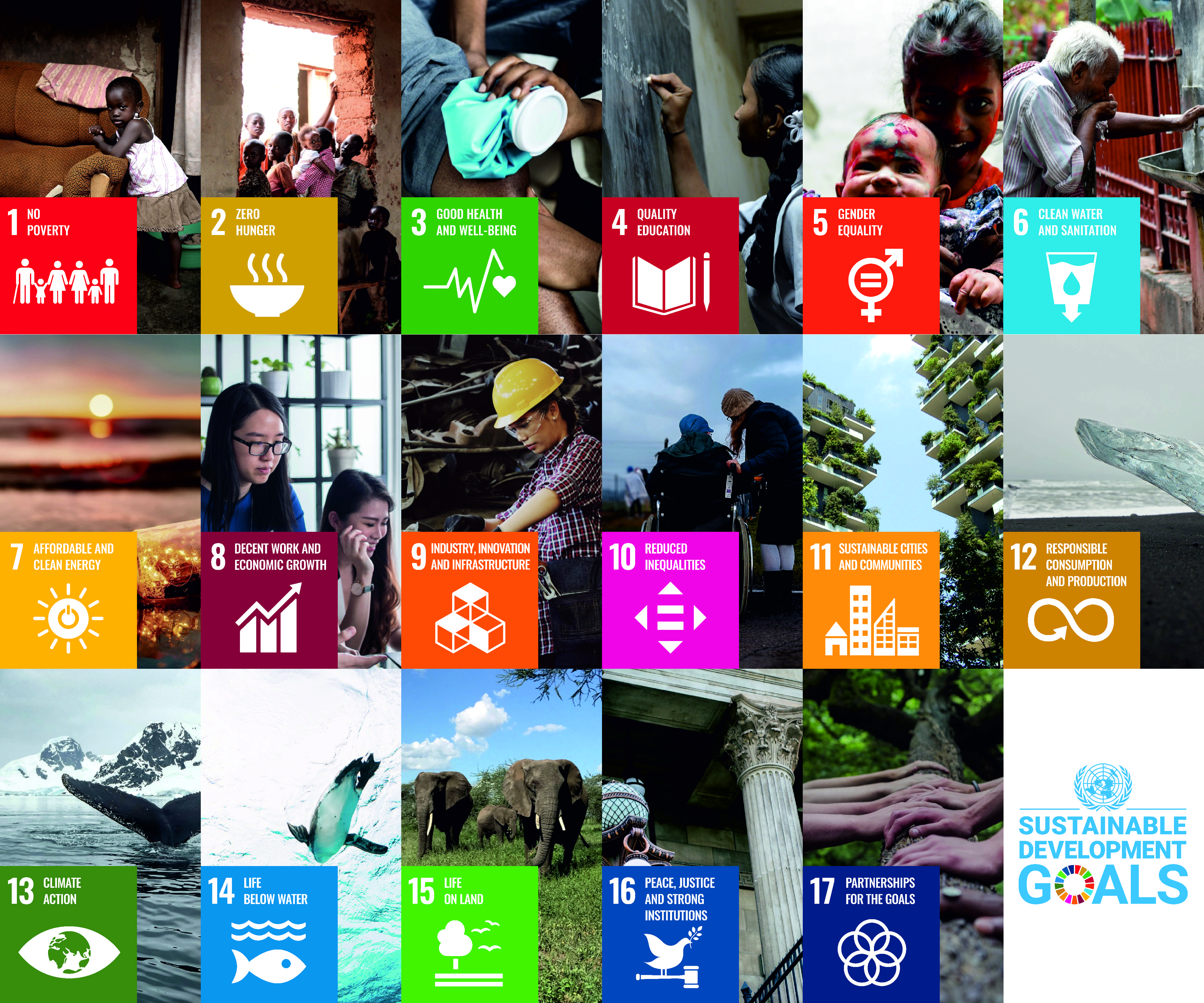 The World Environment Day for this year is very special because the 5th of June 2021 marks the beginning of the Decade on ecosystem restoration, which will continue until 2030. The United Nations acquired this resolution in 2019, and the official end of the Decade is also a year in which we, as a humanity, will check how far and what we have accomplished in order to achieve 17 Sustainable Development Goals! Each of the goals have their targets, and there are in total 169 targets.

The accomplishment of Sustainable Development Goals is most certainly connected to the ecosystem restoration and this is especially evident for Goals: NO POVERTY (1), ZERO HUNGER (2), GOOD HEALTH AND WELL-BEING (3), GENDER EQUALITY (5), CLEAN WATER AND SANITATION (6), AFFORDABLE AND CLEAN ENERGY (7), DECENT WORK AND ECONOMIC GROWTH (8), SUSTAINABLE CITIES AND COMMUNITIES (11), CLIMATE ACTION (13), LIFE BELOW WATER (14), LIFE ON LAND (15), PARTNERSHIP FOR THE GOALS (17).

An interesting presentation on how some of the degraded ecosystems appear nowadays and how they should look after 10 years i.e., after 2030, and how restored ecosystems contribute to sustainable goals was presented by the IUCN.

Even though many challenges are ahead of us, in the Decade on ecosystem restoration we will focus on those vulnerable and degraded parts of our planet that are changed due to intensive usage and encroaching on natural values, which resulted with change of basic ecological characteristics. These changes resulted with significant disturbances in the balance between plant and animal species within degraded ecosystem and habitats, and the impact of mankind is unquestioned. How we can achieve change? The change is possible through the ecosystem restoration, which in other words means preventing, halting and reversing degraded natural surfaces i.e., habitats.

Ecosystems such as forests, oceans, rivers and lakes, grasslands, mountain areas, wetlands and others, have specific biological, ecological, geological and hydrological characteristics and with their degradation, vulnerable and changed ecosystems are formed, hardly supporting the biological diversity and in general, negatively effecting the humankind existence.

Grasslands as a natural habitat are often in a degraded form due to intensive agriculture, which results with the lack of plant biodiversity, some of the plants being trampled as a consequence of overgrazing, while important degradation comes in a form of succession – overgrowth of grasslands with bushy vegetation, and then with forest. The restoration of this habitat will be achieved through extensive agriculture, planned mowing and removal of trees, which will prevent succession. These grasslands would represent a significant source of biological diversity. In the Plitvice Lakes National Park there are 14.8 % of grasslands with peatlands present on the whole Park`s surface.

Forest ecosystems are degraded because of the intensive human activity such as tree cutting and fires in order to clear the surfaces for agriculture, which is in some countries only for monoculture like palm trees for palm oil. This degradation results with the loss of habitat for plant and animal species, and with tree cutting it is obvious that the lungs of the planet Earth disappear, resulting with less carbon dioxide removed from the atmosphere, consequently reducing the removal of greenhouse gas and enhancing the climate change. Restored forest ecosystem will be a habitat in natural development (after the long time of reforestation), without active fires and with each and every development stage of the trees. It was calculated for the Plitvice Lakes National Park that the above and below ground biomass of forests is 7 770 716 t i.e., 330 t/ha, which means that the Plitvice lakes` forests are one of the most productive forests in Europe (to compare, the biomass of the European forests is 120 t/ha).

Peatlands are a unique ecosystems that are present on the soil impoverished with nutrients, however they are very valuable due to potentially high quantities of fossil fuel, which is excavated and used as an energy source. The excavation of peatlands represents a significant degradation of this habitat. Peatlands are highly dependable on the water quantities, which flood them, and the lack of natural groundwater or surface water flooding can cause drying and change in the ecological conditions. Lastly, similar as grasslands, succession i.e., the overgrowth of peatlands with trees and bushes, disables the growth of other plant species. The restored peatland will be the habitat for which the active measures of conservation are undertaken through prevention of succession with tree cutting, natural flooding regimes, halt of fires and excavations. In Plitvice Lakes National Park, we are very proud of our peatland surfaces as a habitat for carnivorous plants and moss Sphagnum sp., and some other plant species.

Freshwater ecosystems such as springs, streams, rivers, lakes and wetlands are often degraded due to human activities, which cause damming, dry out, overfishing and pollution with wastewaters from households and industry. Damming of the watercourses with artificial dams causes significant changes in the flow of matter and energy through river ecosystems, and especially has negative effect toward fish migration. Pollution of freshwater ecosystems also contributes to significant degradation, which causes change in the physico-chemical and biological conditions, enhancing the trophic state and reducing biological diversity. Restored freshwater ecosystems are those with good to very good water quality, removed artificial dams, sustainable fishing, and wetlands sustained with natural flooding regimes thus representing hot spots of plant and animal species, especially birds. In the Plitvice Lakes National Park even though represented at less than 1 % of the Park`s surface, the freshwater ecosystem in the form of karst springs, streams, small rivers and lakes is the most impressive part of this protected area. Cascading lakes separated with tufa barriers, were formed due to the process of tufa precipitation, and this unique process with its components was recognized as an outstanding universal value, which contributed to enlisting of the National park on the UNESCO World Heritage List.

Our blue planet Earth is covered with 71 % of water, and within that surface oceans are represented with 96.5 %. Oceans are a unique ecological system responding to climate change with higher temperatures and acidification, water-level rise and flooding of coastal areas, while also being sensitive to pollution (similar as land and freshwater ecosystems). Changes in the temperature and decreased pH values in oceans result with extinction of reef corals and endanger the existence of fish species. Overfishing has a negative impact on biological diversity as well as on food webs, which results with collapse of interspecies relations. The impact of waste such as plastic that ends up in the oceans decomposing to tiny particles like microplastic, represents dangerous threat, which consequences are yet to be found. Restored oceans in every part of its surface, water depth and bottom are ecosystems rich with plant and animal species, with present sustainable fishing, and resilient to climate change due to different activities undertaken that lead towards climate change mitigation.

As a part of the campaign for the World Environment Day, the Ecosystem Restoration Playbook was published by IUCN, and there you can read all about different approaches towards restoration of forests, agricultural surfaces, grasslands and savannas, rivers and lakes, oceans and coastal areas, cities and towns, peatlands and mountains. Furthermore, this guide emphasizes the connection between society and institutions through #GenerationRestoration as a global movement for ecosystem restoration to the well-being of humans and nature.