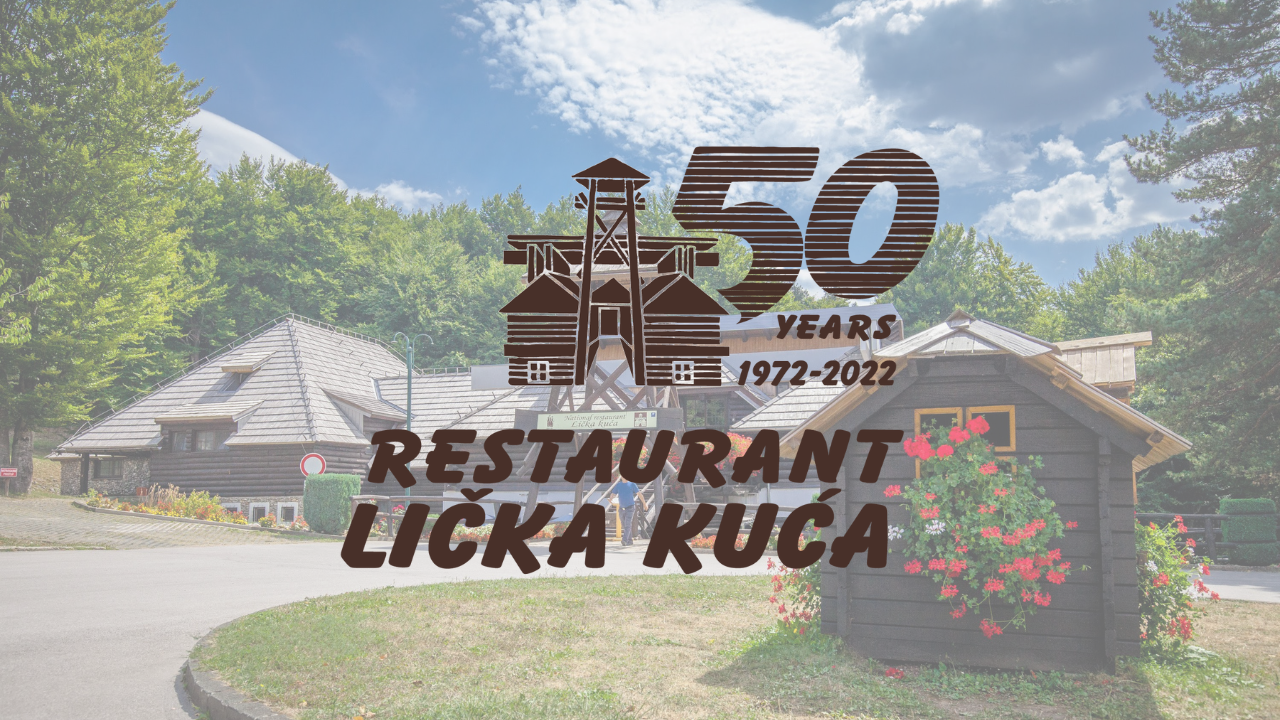 The iconic restaurant “Lička kuća”, one of the symbols of the Plitvice Lakes National Park, but also of Lika’s tradition, is celebrating its 50th birthday! Surrounded by a dense forest on one side and Plitvice Lakes on the other, “Lička kuća” is situated in an idyllic landscape that’s just begging for long walks and exploration of the enchanting region. The fresh Lika air is famous for its appetite-stimulating qualities. After a walk through the nature, there is nothing better than homemade food full of nutrients and aromatic ingredients.

Visit us from July 1, 2022, and in front of the Lička kuća restaurant, visit the photo exhibition that will show you our most famous restaurant through time – from 1972 to today.

“Lička kuća’ was established on July 4, 1972. I remember that the works were delayed, so they were being carried out until the opening day. Before the opening day, work was done overnight. The workers were so tired that they would sleep on the construction site itself. There were four Lika villages on the upper floor of ‘Lička kuća’: Doljani, Smiljan, Pećani, and Lovinac. Initially, there was a disco on the lower floor, where today there is ‘Japodska kuća’, and after the disco, there was a market since there were up to 2500 campers in the nearby camp. After the camp was moved to Čatrnja, ‘Japodska kuća’ was opened on the lower floor instead of the market. This arrangement has remained to this day. ‘Lička kuća’ was best known for its spit-roasted lamb, which was especially appreciated by local guests. In addition to lamb, bread under the baking bell, which we made on our own, was in great demand. Interestingly, the restaurant was open until 11 p.m., but it rarely closed before 1 a.m. or 2 a.m. There was always live music in ‘Lička kuća’, various musical ensembles performed, mostly tamburica ensembles. We have always made sure that we have a great staff at ‘Lička kuća’, mostly scholarship holders.” – Pajo Miletić, former director of the “Lička kuća” restaurant.

The look of the entire restaurant is modelled on rural Lika houses, and ancient crafts are presented as well. Every curious guest will see the interior transform into an ethnographic museum, with the warmest and most cordial domestic atmosphere. Even today, Lika cannot escape the signs reminiscent of the once difficult life of the highlanders, but the desires of the new age easily find their place in such spaces, so even these details speak volumes about the resilience of the inhabitants. Despite this difficult environment, the people of Lika have remained excellent hosts who will keep each passenger warm by the fire, feed them real homemade food and refresh them with fragrant plum or herbal brandy to which they attribute numerous medicinal properties.

FROM SIMPLE FOOD TO EXCELLENT GASTRONOMY

Lika is known for its hard soil and harsh winters, but the people of Lika never allowed their dining tables to be a reflection of scarcity. On the contrary, those who know the attitude of the people of Lika towards food will know that there is a lot of passion, special creativity and skill in it, and often joy, and even real feasts. It is therefore not surprising that this restaurant brings out the best in the rare and choicest ingredients and thus reaches the quality of authentic cuisine worthy of comparison with the world’s best restaurants.

Of course, food grown, stored and prepared in the most demanding conditions always offers the most and does not disappoint even the most demanding gourmets. Barley is one such food, a cereal that has always endured the severe Lika cold, but many people today have forgotten how beneficial this ancient grain is. Since ancient times, barley has been used in food as a cereal that strengthens, warms and has a beneficial effect on health. Therefore, barley was rightly chosen to be the star ingredient in numerous dishes on the “Lička kuća” menu.

The traditional version of risotto, lamb orzoto which will delight you, definitely steals the spotlight. Barley as an autochthonous grain replaces rice in a reduction of the dark “Velebitsko” beer and beef bone stock with braised lamb. All the flavours in this dish blend into a perfect combination that will not leave anyone indifferent. Nor hungry.

In Lika, lamb has its own special place. In addition to lamb under the baking bell, which must be ordered at least three hours in advance, “Lička kuća” also offers lamb prepared in several different contemporary ways. “Lički zavežljaj” (“Lika bundle”) is one of those dishes you cannot go wrong with. Vegetables and potatoes from Lika are baked in baking paper together with lamb marinated in homemade plum brandy. This dish will invigorate you with healthy ingredients and unique aromas the homemade lamb brings. What distinguishes local lamb from lamb from other parts of Croatia is the fact that more than fifty different plant species, a quarter of which are medicinal, grow on one square meter in Lika. All these flavours and medicinal ingredients can be found in the meat we serve here.

ANCIENT FIRE AND THE TREASURE OF BREAD

With all the aromas that the mentioned dishes give us, one traditional scent is especially important for the full Lika experience. That is the scent of a hearth, accompanied by the sound of a crackling fire, a scent without which meals have been unimaginable for thousands of years.

That is bread, a real treasure of the human race made from flour. Homemade bread is baked daily in “Lička kuća”, the scents of which are reminiscent of ancient hearths in which bread occupied a central place. You will not be disappointed by the skills of the “Lička kuća” in-house baker. In addition to the baker, “Lička kuća” also has its own butcher who prepares the meat for all dishes on the menu.

“Three of us worked in the bakery baking bread under the baking bell for ‘Lička kuća’. (…) We would start working early in the morning at 6:00 a.m. because the restaurant opened at 10:00 a.m., and by then everything had to be ready. Bread under the baking bell was baked exclusively on wood in a rather cramped and small space, so the working conditions were difficult and demanding because of the hot temperatures. First, we would grind the flour at the mills in the Korana River, and afterwards, we would get the finished flour through our procurement. We made the yeast ourselves in the traditional way. Sometimes we would bake “masnica” pies under the baking bell, and we would also often bake doughnuts.  We were very harmonious, we sang while working, I loved the competitions and prizes. Our waiters respected us, we often all hung out in our little bakery celebrating various events. I also remember the competitions and prize trips since our ‘Lička kuća’ team always won some prizes,” said Kata Špoljarić, a worker at the “Lička kuća” restaurant bakery who worked in the park from 1972 until retirement.

In addition to offering an unparalleled natural treasure, “Lička kuća” also brings you healthy, fragrant and skilfully prepared dishes that will complete the invaluable experience. A visit to this pearl of Lika’s offer will provide you with a gastronomic experience, but on top of that, it will be filled with many historical and cultural treasures. And that is why, with a restaurant of such a high quality and with a history to match, Lika is no longer just a stopover on the way to the seaside or a place for a short refreshment after visiting the Plitvice Lakes, but rather a place where you really should come to experience the rhapsody of flavours and invigorate your body and soul. We wish a happy birthday to our “Lička kuća” and all its former and current employees. And we can hardly wait to host you, dear guests. Welcome! Bon appétit!